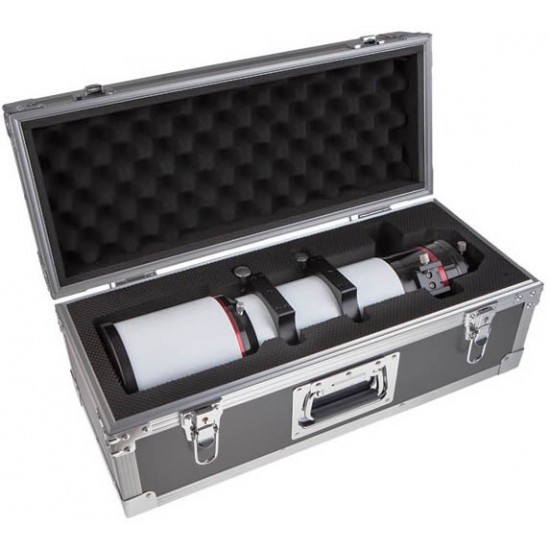 
The SharpStar 100Q ED APO is a good news for serious astro photo enthusiasts. It's a great instrument for great price!
Compared with the first generation product, this Mark II version has the following features:
1 The optical design has changed, in addition to the original F5.8 focal ratio, F4.3 full-frame reducer lens can be used (sold separately)
2. More stylish and streamlined appearance
3. Change of focuser: larger 3.2-inch focuser, plus a 360-degree rear CAA, and angle adjuster.
4. We also added a nice-looking and practical handle.
The SharpStar (Ruixing) 100Q ED APO apochromatic refracting telescope features a four-element in two groups design that includes one Japanese FPL-53ED lens and a full-surface multi-layer coating. The four-element optical design makes the SharpStar 100Q an excellent imaging and observational instrument. The image circle of not less than 44mm makes the 100Q a good match to any full-frame dSLR, CCD or CMOS camera, giving you unparalleled shooting quality. The use of super low dispersion ED glass (FPL-53) offers excellent colour abberration control, not only reflected in high quality imaging, but also takes observation with the 100Q into a new realm. Whether it is sharpness, contrast, or chromatic aberration control, it has a very good performance.
Please scroll down to the bottom of the page to read about our test of the scope for visual observations...
The SharpStar 100Q ED APO provides a very good observation and shooting system thanks to the fast focal ratio. The unique four-piece design incorporates special ED APO lens for excellent chromatic aberration control, sharp stars and overall sharper images.
The SharpStar 100Q ED APO also offers an impressive focusing system while providing an excellent optical system. The SharpStar 100Q ED APO has a two-speed 3-inch rack and pinion focuser with 1:10 aspect ratio. Compared with many refractors on the market, the use of a rack and pinion focuser offers larger payload and a stronger hold, so that your focuser will not slip when using heavy-duty observation accessories or camera. Worried about being out of focus or badly framed image? The 360-degree rotator allows you to easily rotate the shooting angle and correct the framing to your own satisfaction. The 3-inch focuser's 2" international standard interface with brass compression ring does not let your accessories to scratch. More importantly, its 3.2-inch focusing tube is more robust and more stable than most commercially available 3-inch focusing tubes. It also provides good upgrades for heavy-duty accessories such as large-caliber field flatteners.
In addition, the newly improved load-bearing adjustment screw on the body of the focuser lets you to adjust your focuser according to the weight of the attachment.
The SharpStar 100Q ED APO is a reasonably priced observational and imaging tool with fast-focal ratio four-element optical system that features exotic FPL-53 super ED glass, high quality heavy duty 3.2-inch rack and pinion focuser; when compared to other similar products on the market, its value is self-evident. 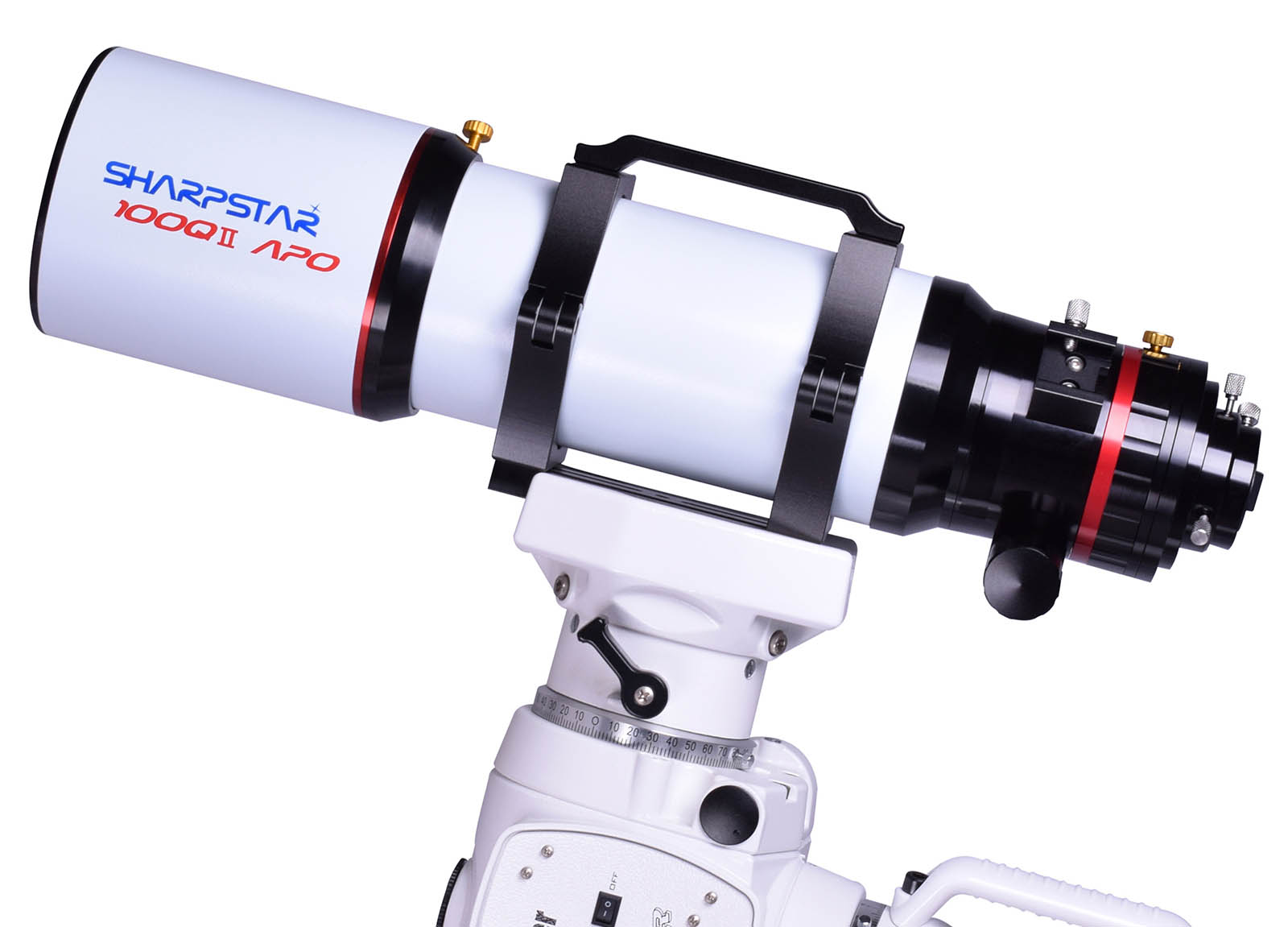 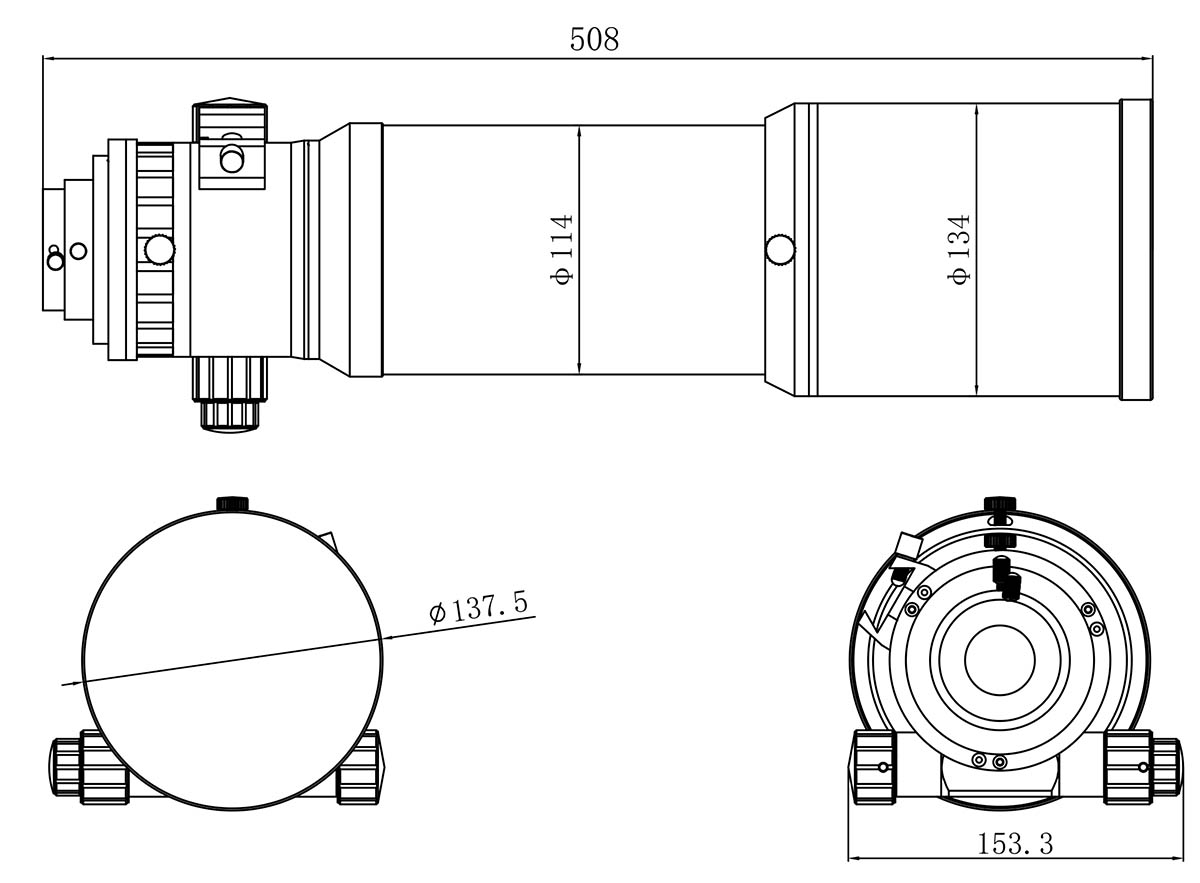 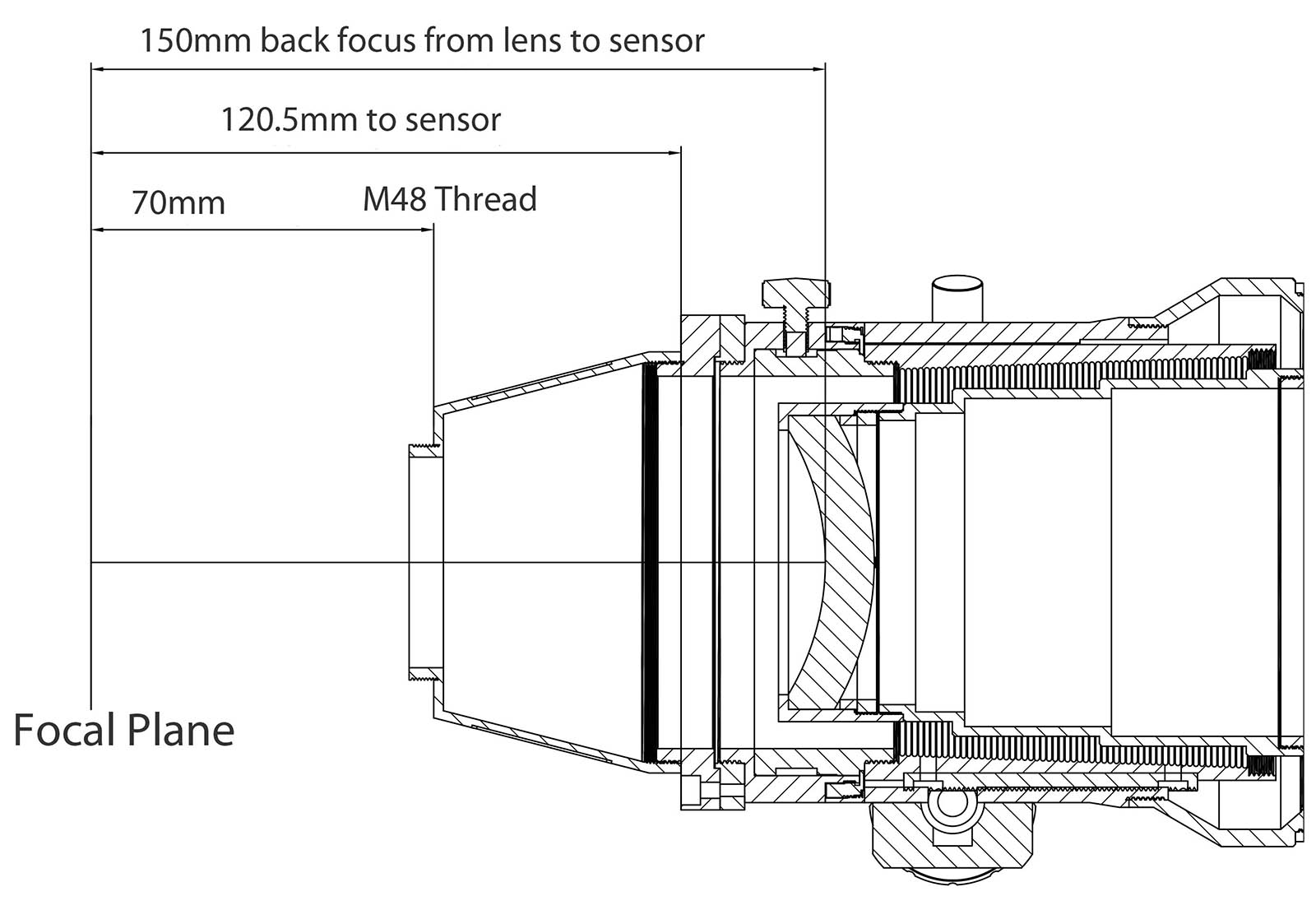 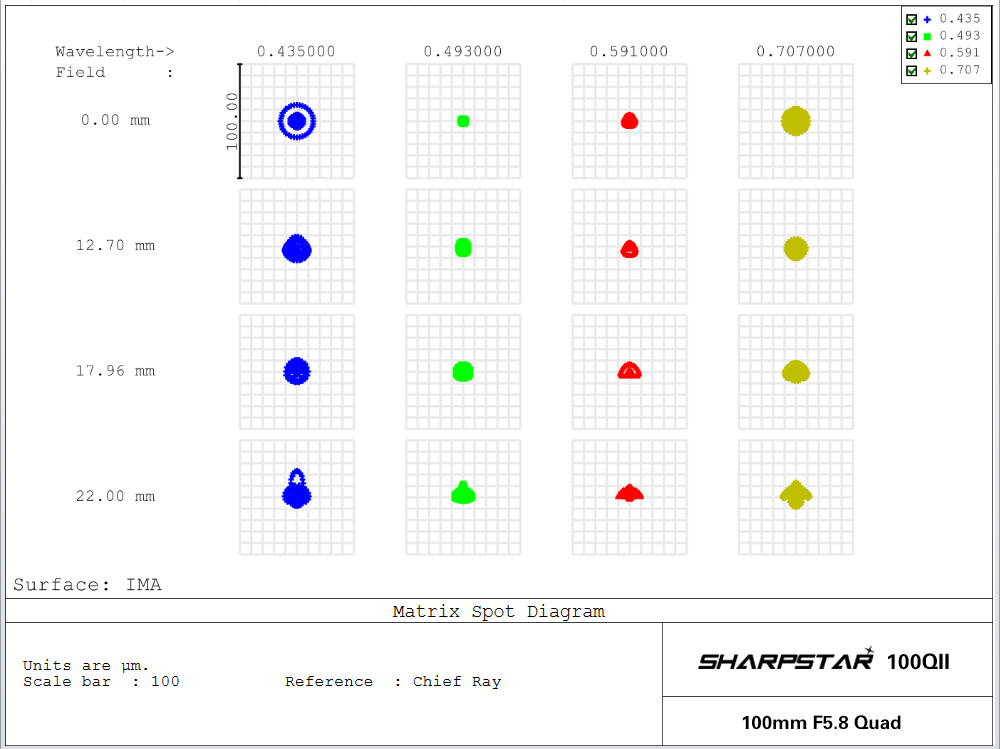 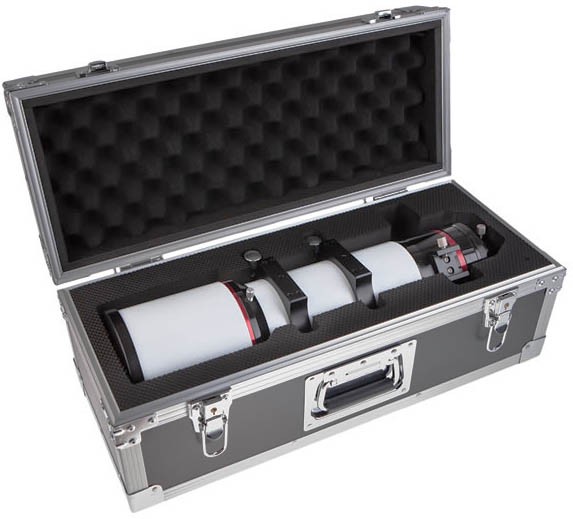 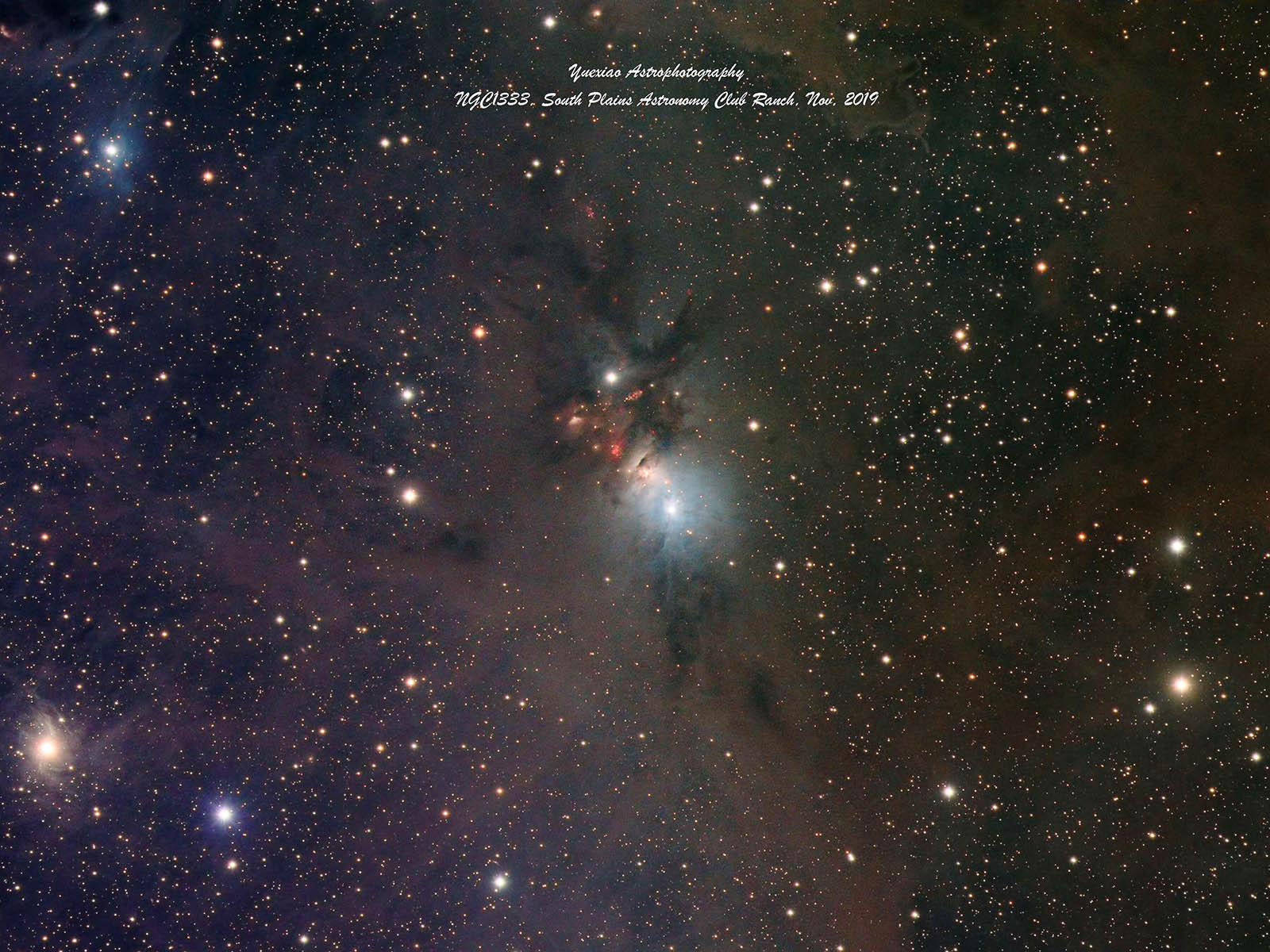 VISUAL USE OF THE SHARPSTAR 100Q Mark II with 2" eyepieces

One of our customers who wanted to use this telescope for imaging as well as a visual grab-and-go scope had some issues with using it with his 2" eyepieces with a 2" diagonal, so we did some research and it seems we've found a solution for him. Please bear in mind that this is a mainly imaging instrument, so some limitations can be expected when using it visually. The limitations are not quality related. These are just related to the already longer than usual back focus still not being enough for the combination of some large 2" diagonals and 2" eyepieces.
Although we did not test it with 1.25" eyepieces, we believe that there will be no problems with a combination of 1.25" mirror diagonals and 1.25" eyepieces.
(just don't forget that we are not discussing here prisms as those always have much longer optical path than mirror diagonals).
So, I've tested the Sharpstar 100Q Mark II with a 2456103 Baader BBHS Mirror Diagonal as we had no stock of the 2456100, but I believe the size is the same, just the optical quality and coating are even better...
Note that the above Baader diagonal is not a full sized 2" diagonal (then we would not reach focus), so it provides a slightly smaller field stop, but still about 30% larger than a 1.25" diagonal would.
On the eyepiece side I had a TST2-2  2" eyepiece holder barrel and on the telescope side I had a A508T2 (same as TSFA2) 2" nosepiece for the first three eyepieces and the Baader 2408150 for the Televue, simply because I noticed that the A508T2 was touching the side of the TST2-2 adapter and wanted to check if this will help. I found that there isn't much difference as the TST2-2 will leave a 1mm gap anyway, so the size of the A508T2 was not the reason to stop it, or maybe only by a fraction of a mm.
So I think either the A508T2 or 2408150 would be equally good.
Telescope was pointed at Venus.
Here is a list of eyepieces I tested:
1. Vixen NLVW 30mm 65 degrees
Did not come to focus, then removed the barrel/nosepiece from the eyepiece and the eyepiece holder from the diagonal and held it closer to achieve focus. I approximate that it needed about 10-15mm inward movement to achieve focus. This eyepiece could be used only with some modification and the eyepiece holder barrel should be shorter as well in such a case.
2. Celestron Axiom LX 23mm 82 degrees
Came to focus with the drawtube about 5mm out.
Very nice view of Venus.
3.a Hyperion 17mm 68 degrees
I know it's a 2"/1.25" combined eyepiece, but I used it in the 2" barrel and the 1.25" nosepiece that contains the optics of a Barlow was far enough from the mirror surface. It came to focus with the drawtube about 21mm out.
3.b Hyperion 17mm 68 degrees without Barlow part
This way it became a proper 2" eyepiece, although the focal length is now different, 21.8mm
Came to focus with the drawtube about 15mm out.
4.  Televue 8mm Ethos (unfortunately could not test it with a 5mm Ethos that our customer had as we had none in stock...)
Came to focus nicely with the drawtube out about 10mm, so I guess a 5mm Ethos would focus as well...
By this time Venus was down, so I pointed it at Vega and then I also tested it on M81/M82. With the Axiom 23mm both appeared in the middle of the field, but had to separately observe them with the Televue 8mm Ethos, which provided a nice view. Cannot say magnificent view as seeing was not the best... too much moisture in the air...
Tags: SHS-100Q-MkII , SharpStar APOs , SharpStar , Aperture (mm): 100 , Focal Length (mm): 580 , Focal Ratio f/: 5.8